A $5,000 contribution from Rotary to the Historical Association of South Haven (HASH) will help safeguard a community landmark and its treasures. The Rotary grant, $2,500 from the Rotary Club of South Haven which has been matched by its District organization, will support the installation of a fire detection system at the former Hartman School where HASH is headquartered. The 110-year-old building, a designated Michigan Landmark, serves as a repository for thousands of irreplaceable historically important items. The fire detection system will consist of state-of-the-art smoke, heat and water detectors, according to Amanda Creeden, president of HASH who is pictured receiving the grant from Rotary club treasurer Bob Straits. Rotary District 6360 consists of 55 clubs throughout Central and Southwest Michigan. 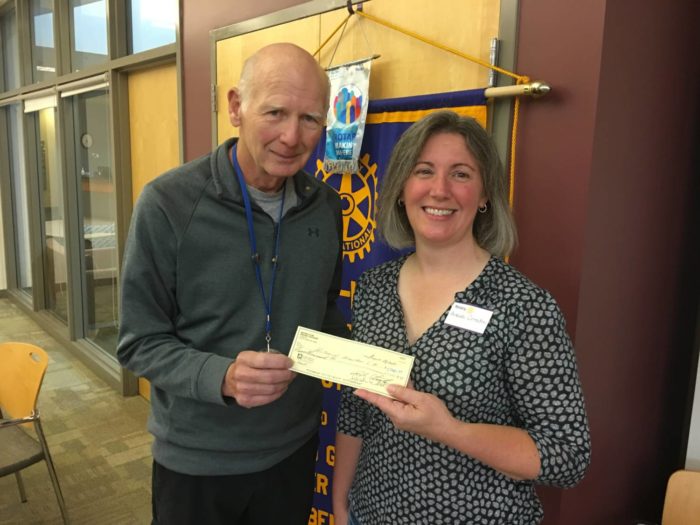 The project has also received financial support from the South Haven Community Foundation and South Haven Women Who Care. The fire detection system has been designed in consultation with representatives from South Haven Area Emergency Services.

2019 HASH poster, Life's at Ease With a Lake Breeze, is based on a vintage postcard. Poster created … END_OF_DOCUMENT_TOKEN_TO_BE_REPLACED

This year’s poster depicts our iconic lighthouse, with a view from the lake, the view that welcomes … END_OF_DOCUMENT_TOKEN_TO_BE_REPLACED

Tueday, July 5th and Thursday, July 7th, 7p.m. - Cottages and Resorts on the North Beach. A book launch and signing for … END_OF_DOCUMENT_TOKEN_TO_BE_REPLACED