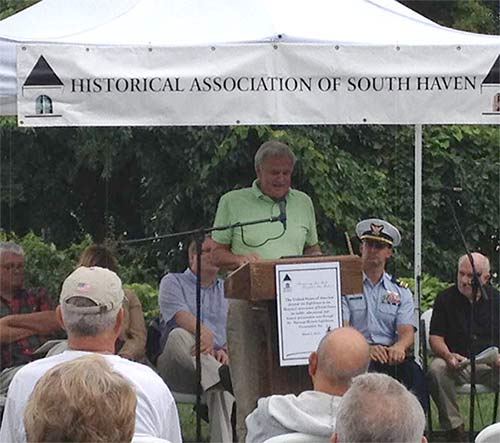 It’s official now! Amidst the rain and a few umbrellas, on August 9, 2012, during a transfer ceremony high on the lake bluff overlooking the pier, the Historical Association of South Haven, proudly accepted the Deed to the lighthouse from the United States of America. The drizzly afternoon did not dampen the spirits though of some 50 plus supporters, who showed their enthusiasm for this acquisition by attending. So once again, thank you South Haven.

2019 HASH poster, Life's at Ease With a Lake Breeze, is based on a vintage postcard. Poster created … END_OF_DOCUMENT_TOKEN_TO_BE_REPLACED

This year’s poster depicts our iconic lighthouse, with a view from the lake, the view that welcomes … END_OF_DOCUMENT_TOKEN_TO_BE_REPLACED