In 2009, with the sponsorship and financial backing of the Historical Association of South Haven and Albemarle Corporation, the Bark Peelers Vintage Base Ball Club was formed. The team is composed of 18 “gentlemen” from around the South Haven community who, although not necessarily great ballplayers, love the game of baseball and enjoy the opportunity to play. Vintage Base Ball recreates the way the game was played after the end of the Civil War.

After the end of the Civil War (1865), town teams would offer challenges to each other. Back in those days for one team to travel to a neighboring town was a real effort as roads were not well developed and the main mode of transportation was horse drawn wagons. The whole philosophy of being a host team in a Base Ball game in the 1860s was completely 180 degrees from what it is today. Because it was so difficult for teams to travel to another town to play Base Ball, it was the responsibility of the host team to ensure that the visiting team was treated with great civility and friendship. The host teams took great pride in their ability to be good hosts for the visitors. Host teams went out of their way to find accommodations and provide sumptuous meals for the visiting teams. This philosophy of being good hosts carried over into how the actual game was played. Players took great pride in being “gentlemanly”. Some examples:

• No profanity or derogatory comments were aimed towards the visitors by either the host players or “cranks” (fans). This does not include good natured insults that are normal in this type of game.

• The batter indicated to the hurler where he wanted the pitch to be placed. The hurler than tried to throw the ball to that spot

• Players were expected to make their own calls on whether they were out or safe or whether they made a catch or not. The umpire was simply there to enforce the “rules of conduct” or resolve a play that was too close to call by the players

2019 HASH poster, Life's at Ease With a Lake Breeze, is based on a vintage postcard. Poster created … END_OF_DOCUMENT_TOKEN_TO_BE_REPLACED

This year’s poster depicts our iconic lighthouse, with a view from the lake, the view that welcomes … END_OF_DOCUMENT_TOKEN_TO_BE_REPLACED

2016 HASH poster celebrating our Catskills of the Midwest exhibit, was produced using an antique … END_OF_DOCUMENT_TOKEN_TO_BE_REPLACED 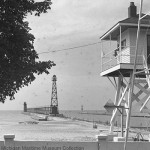 YOU ARE INVITED - SOLD OUT! We’re sorry, but we sold the last ticket to this event. Light the Way Kick-Off … END_OF_DOCUMENT_TOKEN_TO_BE_REPLACED